unwanted drama minimized systematically for all

The formal vocabulary used to describe the rules in Thumos Philosophy is Thumoslang. OTB did not mention the vocabulary by name because neither Quach nor Canny understood their creation completely. They did not realize that it was more powerful than the rules. Quach discovered the vocabulary’s immense power in December 2018 when he unexpectedly used Thumoslang for Changing a Life in Three Sentences. He then spent several years developing it further. 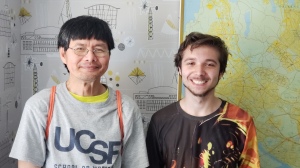 Finally, in early 2022, Nickantony Quach (pictured, left) wrote the first book for teaching Thumoslang; it has three alternative titles. Life in 184 Words is its official book title. Thumoslang on the Run (OTR) is its online book title, and The Guide to Thumoslang is its initial book title. His chief editor is Alec Mustafayev (right). Together they are the Quach & Mustafayev Group, also known as the QMG duo (#QMGDuo).

Platform technology is a set of primary products and essential services used to build and launch another technology. Likewise, platform philosophy is a set of prior terms and basic rules used to create and launch another philosophy. Thumoslang is a platform philosophy. You can use it as a foundation for another philosophy. To use it as a precursor to personal philosophy, use only the terms already identified in the vocabulary to describe individual rules for social engagement. In a sense, Thumos Philosophy is the first application of Thumoslang.

Likewise, every good rule specified by the Thumos Philosophy is a mere observation of a phenomenon. The authors of OTB were not perfect. Readers should consider a philosophical rule in OTB invalid or dogma if it does not express an observation of a phenomenon. Whenever readers find the text in OTB or OTR impactful or powerful, they experience the consequence of the author’s insistence on objective observation and dogma avoidance. This approach to philosophy gives rise to the first falsifiable definition of love, as presented in the original Thumos textbook, the first book written for systematically teaching how to love systematically.

EDITORIAL NOTE: Do not include this section in the print edition.

NOTICE: This chapter also appears as the standard text on the following page: Thumos Philosophy.